One of the possible reasons, that experts see as to why the Philippines is suffering more is because of the continued population growth in the country. If in the Philippines, the population continues to grow, this phenomenon is the opposite, the Faroe Island in Denmark.

In fact, other men here are looking for wives because of the decrease in their population, especially women.
Today, it has an estimated 50,000 people living here, but as time goes on, the population of Faroe Island is declining and decreasing. 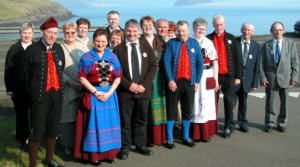 Only about four percent are women in their area. That is why some choose to marry someone else because even if they want to get married in their area, they cannot do it because of the lack of women.

They have also now learned to use dating apps using the internet because almost everyone is also hi-tech in their country.

Usually, they are looking for women from Asia. Others search through their friends who have an Asian boyfriend. The only proof of this is the 300 women from different parts of Asia who have now moved to Faroe Island and joined their boyfriend who met on dating sites.

The Asian group today has the highest ethical minority on the 18 islands. Why is it that instead of increasing the population on Faroe Island, it continues to decrease as time goes on?

According to Prime Minister Axel Johannesen, many of the residents have moved abroad to seek higher education or good jobs. But, even as the years passed, no one came back here.

For Filipina Antonette Egholm, the place on Faroe Island is beautiful and safe even though their climate and culture are different.

In an interview with the BBC’s Tim Ecott, Antonette said that the people in Faroe Island are kind. Other than that, they are sociable as well. Compared to the Philippines, Faroe Island is far away. Because in the Philippines there is a lot of heavy traffic and cr1mes.

Antonette added that the Faroe Island system is good and orderly, and when it comes to the quality of education and medical services. His wife, Regin, said that their place should not be feared but that they should try to come here and hug them.

Right now they are in urgent need of new people in their area.
“We actually need fresh blood here. I like seeing so many children now who have mixed parentage. Our gene pool is very restr1cted, and it’s got to be a good thing that we welcome outsiders who can have families. ”

What can you say about this? Do you wish to have a lifetime partner in the Faroe Island, in Denmark? Kindly share your comments, reactions, and thoughts with us.